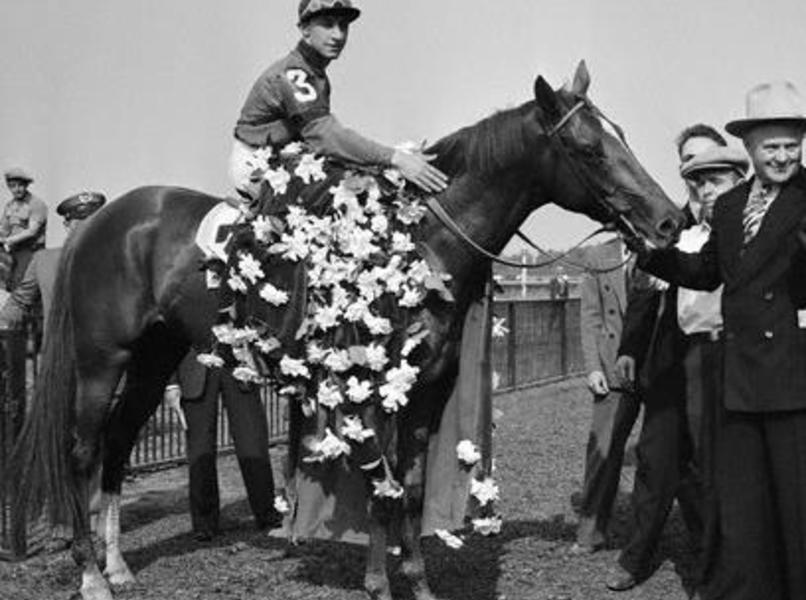 Previous
War Admiral
Next
Count Fleet
Whirlaway
Jockey Eddie Arcaro called him “not the best, but the runningest” horse. His trainer called him dumb, stupid and crazy. But to thousands of fans who bet their shirts on him and won, Whirlaway was more than the fifth Triple Crown winner.

A brilliant chestnut with an unusually long and thick tail and a penchant for running all over the racetrack, in 1941 the crowd-pleasing “Mr. Longtail” often landed above Joe DiMaggio, who had a 56-game hitting streak, and Joe Louis, who had defended his heavyweight title seven times, on the front pages of the nation’s sports sections.

Nearly 70 years after his death, Whirlaway’s legend lives on. He had a habit of bolting to the outside coming off the turn. In the 1940 Saratoga Special, he went so wide he hit the outer rail, but still won. He also won the Derby in a then-record of 2:01 2/5. A week later, after falling so far behind the field he was out of the picture, he roared back to a thrilling 5 ½-length win in the Preakness. In the Belmont Stakes, knowing he couldn’t hold Whirlaway back, Arcaro sent him to the front with a mile to go and he took the Triple Crown by 1 ¼ lengths. That summer, he won the Travers – the only Triple Crown winner to do so – and then spent the next season running primarily for war bonds, racing 22 times and raising $5 million, including $100,000 at Aqueduct on Army-Navy Day, when he won the 1942 Brooklyn Handicap.

Retired at age 5, with a record of 32 wins, 15 seconds and nine thirds from 60 starts and a bankroll of $561,161, which made him the all-time money-earning thoroughbred, Whirlaway became a successful sire. He was inducted into racing’s Hall of Fame in 1959.

Calumet Farm is a thoroughbred breeding and training farm established in 1924 in Lexington, Kentucky by William Wright.

Ben A. Jones was hired by Warren Wright, Sr. to train for Calumet Farms. Under Jones, Calumet became one of the greatest stables in thoroughbred racing history. Jones is the only trainer to win the Kentucky Derby six times. He won the Triple Crown with Whirlaway and Citation.

Eddie Arcaro was an American Thoroughbred horse racing Hall of Fame jockey who won more American classic races than any other jockey in history and the only rider to have won the Triple Crown twice.