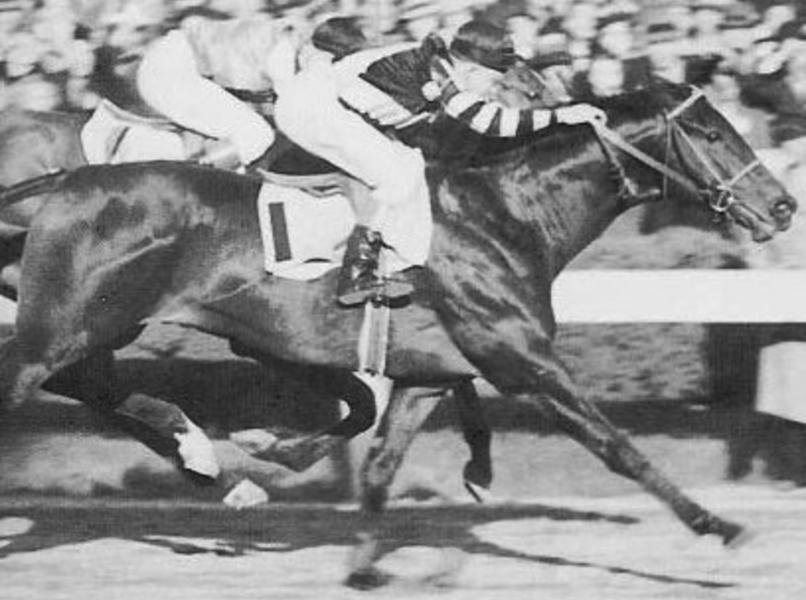 Previous
Omaha
Next
Whirlaway
War Admiral
War Admiral looked nothing like his massive, coppery red father, Man o’ War. With a sleek, mink-brown coat and a short, choppy stride, the colt stood just 15.2 hands tall. He was high-strung, but came off a solid 2-year-old season to win all eight of his starts, becoming the first Triple Crown winner to go unbeaten in his sophomore year.

“The Admiral” began his 3-year-old campaign at Havre de Grace, winning an allowance and the Chesapeake Stakes and earning the favorite’s role for the Kentucky Derby. After he delayed the start for eight minutes, he cantered home a 1 3/4- length winner over 2-year-old champion Pompoon.

The following Saturday in the Preakness, Pompoon proved a much tougher rival, but War Admiral prevailed after a thrilling stretch duel to win the second leg of the Triple Crown by a head. He won the Belmont Stakes by three lengths over Sceneshifter, but it came at a price. Acting up at the start, repeatedly crashing through the gate and delaying the race for almost nine minutes, he stumbled at the break, slicing off a piece of his right front heel. He left behind a trail of blood as he clipped a fifth of a second off his father’s track record for a mile and a half, winning in 2:28 1/5.

Fears that he would be forever lame proved unfounded, and War Admiral returned to racing in October, winning an allowance, the Washington Handicap and the Pimlico Special, to earn Horse of the Year honors with an 8-0 record, and the following year won nine of his 11 starts, losing only the Mass ‘Cap, in which he was fourth, and the famous match race with Seabiscuit in the 1938 Pimlico Special.

Retired at age 5, War Admiral became a sire; included among his stakes winners were Busanda and Busher. When he died in 1959, he was buried next to his father underneath the famous Man o’ War statue at Faraway Farm near Lexington, Kentucky.

George H. Conway was an American horse trainer who is best known for training War Dmiral who was selected as the American Horse of the Year in 1937.

Nicknamed "The Flying Dutchman", Kurtsinger took after his jockey father. In 1931 and 1937, Kurtsinger was the leading jockey in earnings in the United States. He was inducted into the National Museum of Racing and Hall of Fame in in 1967.