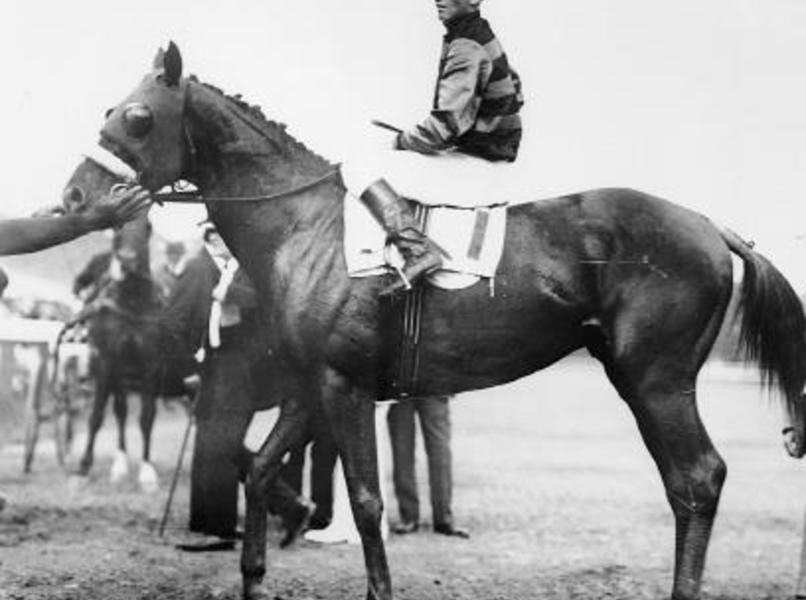 Previous
Next
Gallant Fox
Sir Barton
When Sir Barton became the first horse to win the Kentucky Derby, Preakness and Belmont Stakes in 1919, he did so before the phrase “Triple Crown” was coined.

Plagued with soft feet that caused him to lose his shoes during a race, Sir Barton was a cranky colt who mostly disliked humans. Still a maiden on Derby Day in his first start as a 3-year-old, Sir Barton was supposed to function as a rabbit in the Run for the Roses for his more famous stablemate. But, no one told Sir Barton, and he won by five widening lengths. Four days later, he won the Preakness at Pimlico, and, ten days later, he took the one-mile Withers at Belmont Park.

Well-rested by the time the Belmont Stakes came around, Sir Barton had but two opponents in the race, which was then contested at a mile and three-eighths. According to the chart, “Sir Barton, after beating the gate, indulged Natural Bridge with the lead over the Belmont course, then easily took the lead after entering the main course and, drawing away, was easing up at the end.” His time of 2:17 2/5 was an American record.

Finishing up his sophomore campaign with a record of eight wins from 13 starts, Sir Barton won both divisional and Horse of the Year honors, and began the following year as the top older horse. But at the same time, Man o’ War was achieving near-immortal status, and the public was clamoring for a match race, which finally took place in Canada. Sir Barton lost by five lengths. He never won again, and was retired to stud. Originally buried near his paddock, in 1968 Sir Barton was moved to Washington Park in Douglas, Wyoming, where he lies beneath a statue of a horse.

John Kenneth Leveson Ross, also known as Jack, was a businessman, sportsman, and thoroughbred racehorse owner and breeder in Canada.

Havery Guy Bedwell was an American Hall of Fame Thoroughbred racehorse trainer and owner. In 1909, Bedwell won more races than any trainer in the United States.

Johnny Loftus was an American Thoroughbred horse racing Hall of Fame jockey. Between 1909 and 1919, he won 580 races. Loftus was the top money-winning jockey in the United States in 1919 before retiring to become a trainer.