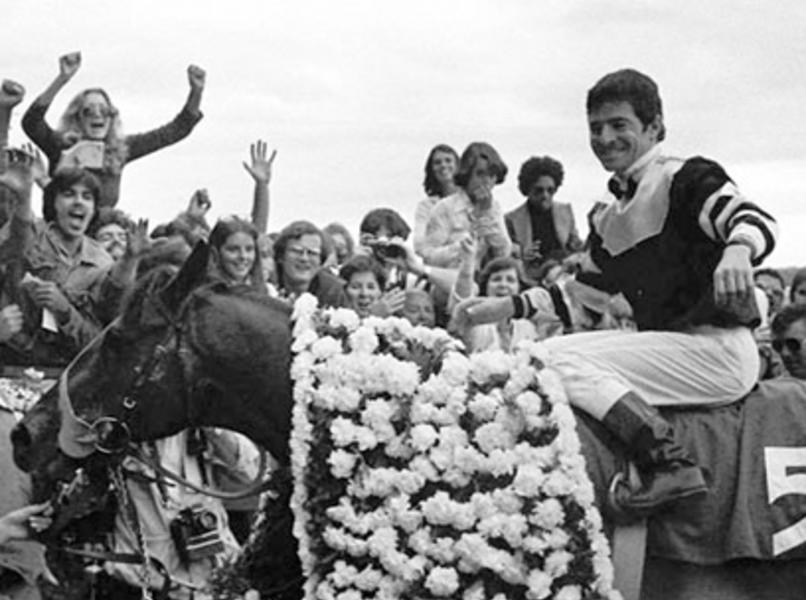 Previous
Secretariat
Next
Affirmed
Seattle Slew
At birth, no one expected much from Seattle Slew.

Foaled in 1974 in Kentucky, Slew was first described by a breeding manager as “ugly.” A plain dark bay – nearly black – colt, Slew had no white markings, big floppy ears, and a domineering personality.

The colt was rejected from the prestigious Keeneland yearling sale based on pedigree and appearance. Instead, he went to a more open Fasig-Tipton auction and was sold for $17,500; the owners were two young couples from Washington State – Mickey and Karen Taylor and Jim and Sally Hill.

From the moment he set foot on a racetrack, Slew proved himself to be a born runner. The colt began at Belmont with an easy five-length victory in a six-furlong maiden race. He ran twice more at two, enough to be named two-year-old champion. After two easy Grade 1 scores in the Flamingo and the Wood Memorial at three, he headed to Churchill Downs.

Caught in traffic after a troubled start, Slew emerged a 1 3/4 length winner. In the Preakness, he won by a length and a half. At the Belmont Stakes, he broke from post 5 over a muddy track and took an authoritative lead from the start; though momentarily pressured by Sanhedrin near the quarter pole, Slew maintained the lead to the finish, winning by four lengths. He became the 10th Triple Crown winner and the first to do so undefeated.

Two months before he was retired, Seattle Slew defeated the heir to the Triple Crown, Affirmed, in the Grade 1 Marlboro Cup at Belmont Park. After a successful stud career – Seattle Slew sired more than 100 stakes winners including A.P. Indy, Swale, and Slew o’ Gold – he died on the 25th anniversary of his victory in the Kentucky Derby.

Mickey Taylor and his wife started from scratch, entering the horse racing industry with a few purchases at auctions and sales. At one particular sale, Karen convinced her husband to purchase an awkward looking colt for $17,500. That colt was Seattle Slew. The couple continued to be successful over the years and have been an influential force in the industry over the years.

"Billy" Turner began his career as a steeplechase jockey while still a teenager. Working with trainer Burley Cocks, Billy became assistant trainer until 1966 when he ventured out on his own to train.

Jean Cruguet is infamous not only for riding a Triple Crown winner, but for his victory salute while crossing the finish line of the Belmont Stakes. Cruguet stood up in the stirrups, raised his right arm over his head and gave the crowd a victory salute by waving his whip in the air. This move has been mimicked by many jockeys since that incredible moment.