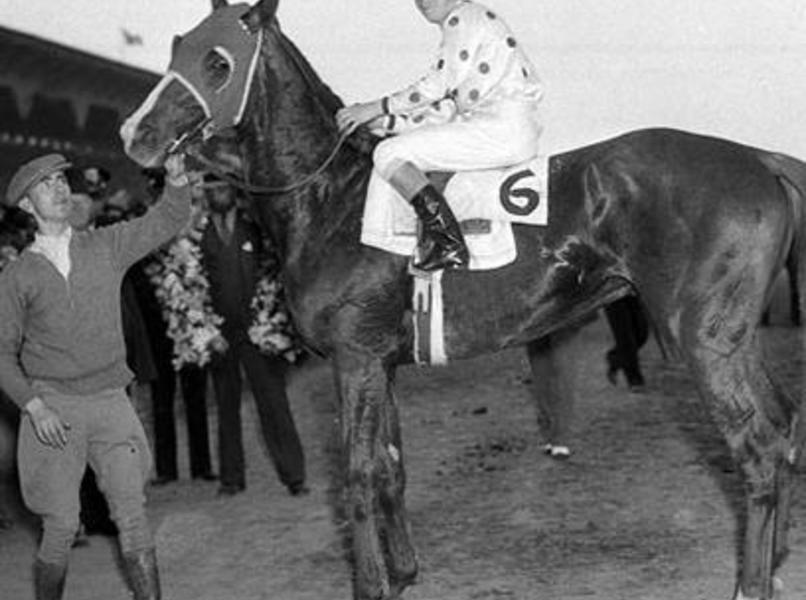 Omaha’s father was Gallant Fox. Omaha had a striking blaze down his face and inherited his sire’s tall, leggy frame and penchant for speed. Omaha stamped himself as a 3-year-old to be reckoned with after a powerful, four-length victory at old Jamaica. The luster dimmed when he finished third in the Wood, and he went postward at Churchill Downs as the second choice to a filly, Nellie Flag, granddaughter of Man o’ War. Caught in traffic, Nellie Flag finished fourth as Omaha went onto an easy 1½- length victory; a week later, he had an easier time with a six-length romp in the Preakness Stakes.

Belmont Stakes Day dawned gray and damp, and after day-long downpours the track was sloppy. Four horses lined up against Omaha: Rosemont, Cold Shoulder, Firethorn, and Sir Beverley, and when the gates opened Omaha was shuffled back. But jockey Willie Saunders quickly settled Omaha down, and, waiting patiently, finally sent the colt after Firethorn with three furlongs to go. Firethorn proved tough, fighting on through the stretch but eventually yielding as Omaha became the third Triple Crown winner by a 1½-length margin.

Following victories in the Dwyer and the Arlington Classic, Omaha went abroad, where he won the Victor Wild Stakes and the Queen’s Plate at Kempton Park. He returned to the United States to stand at stud at Claiborne, and later was sent to Grove Porter’s farm in Nebraska.

Omaha died in 1957 at the age of 25 and was buried in Ak-Sar-Ben’s “Circle of Champions.” When the racetrack closed, the University of Nebraska-Omaha took over the land, and his grave is now located next to a culinary arts building. Today, when a cooking project fails, the unfortunate student is told to “Give it to Omaha” – that is, throw it out the window.

Belair Stud bred and owned Omaha as well as his Triple Crown winning sire, Gallant Fox. The stable and breeding farm was founded by Provincial Governor of Maryland, Samuel Ogle, in 1747.

"Sunny Jim", as he was affectionately known, started working at a racetrack as a stable boy in 1885. During his professional career he trained three Kentucky Derby winners, four Preakness Stakes winners, and six Belmont Stakes winners. He went on to win two Triple Crown titles. Sunny Jim was a five time top money-winning trainer. Fitzsimmons was inducted into the National Museum of Racing and Hall of Fame in 1958.

Willie, or Smokey, as he was frequently referred, was a Canadian Horse Racing Hall of Fame jockey.