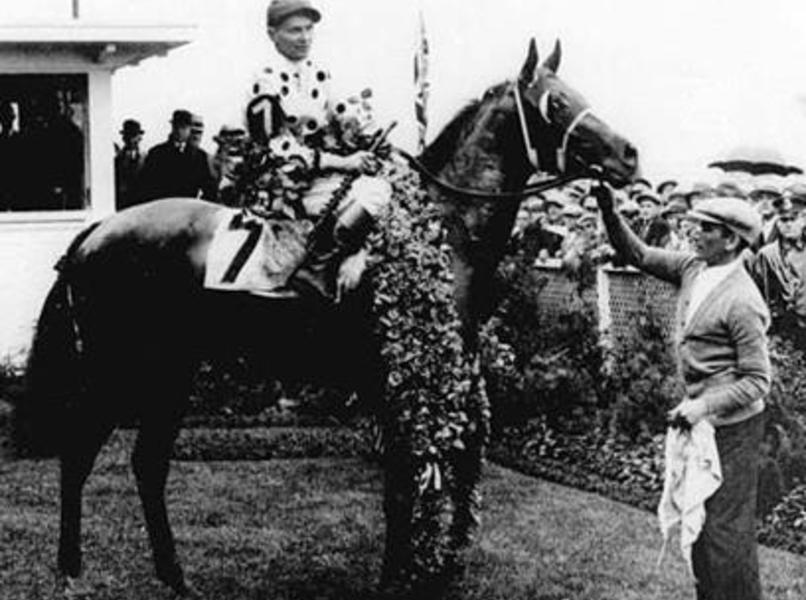 Gallant Fox was a leggy, gregarious bay who enjoyed company. Trainer Sunny Jim Fitzsimmons would send out a team of horses with him in the mornings, relay-style; no other horse was fast enough to keep up with him. In 1930, the Preakness was run before the Derby, and the “Fox of Belair” fought his way to a three-quarter length victory. Eight days later, Gallant Fox gave Earle Sande, who had come out of retirement to ride the horse, his third Derby victory.

In the Belmont Stakes, Gallant Fox carried Sande to a wire-to-wire, three-length victory over the previous year’s juvenile champion, replacing Zev as the nation’s all-time money earner with the winner’s purse of $66,040, and more importantly, cementing the notion of an American Triple Crown comprised of the Derby, the Preakness, and the Belmont.

Gallant Fox would go on to race six more times as a 3-year-old, piling up victories in the Dwyer, Arlington Classic, Lawrence Realization, Saratoga Cup, and the Jockey Club Gold Cup, but his name would also be associated with one of the biggest upsets in horse racing. Sent off as the 1-2 favorite in the 1930 Travers Stakes over a muddy track at Saratoga Race Course, Gallant Fox would get hooked into a speed duel with Whichone, setting the race up for 100-1 shot Jim Dandy, who went on to a stunning eight-length victory.

Retired at the end of the season, Gallant Fox returned to his birthplace, Claiborne Farm. Among his progenies were 1935 Triple Crown winner Omaha, 1936 Horse of the Year Granville, and 18 other stakes winners. He died on Nov. 13, 1954, and is buried at Claiborne, not far from his sire.

Belair Stud bred and owned Gallant Fox. The stable and breeding farm was founded by Provincial Governor of Maryland, Samuel Ogle, in 1747.

"Sunny Jim", as he was affectionately known, started working at a racetrack as a stable boy in 1885. During his professional career he trained three Kentucky Derby winners, four Preakness Stakes winners, and six Belmont Stakes winners. He went on to win two Triple Crown titles. Sunny Jim was a five time top money-winning trainer. Fitzsimmons was inducted into the National Museum of Racing and Hall of Fame in 1958.

Earl Sande was an American Hall of Fame jockey and thoroughbred horse trainer. He came out of retirement in 1930 to ride Gallant Fox.