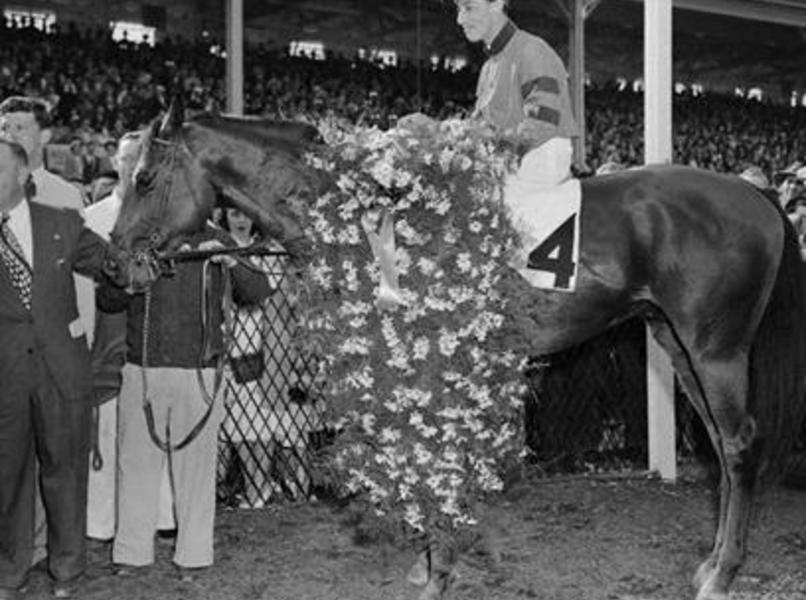 Seven years after Whirlaway donned the Calumet red and blue silks and swept the Triple Crown, a leggy 3-year-old bay bearing the same colors strode onto the track at Havre de Grace for the $29,000 Chesapeake Stakes, which marked the beginning of a 16-race winning streak that lasted until 1950.

The 1948 Kentucky Derby was run over a sloppy rain-soaked track, conditions that favored Citation’s stablemate Coaltown, winner of the Blue Grass Stakes. But when his jockey Eddie Arcaro called, Citation answered. Charging past his stablemate, “Big Cy” went on to an easy 3 ½-length score. Two weeks later, he galloped off to a 5 ½-length victory over Vulcan Forge in the Preakness, and tuned up for the Belmont Stakes with an 11-length win in the Jersey Derby.

On Belmont Stakes Day, he was sent off as the 2-5 favorite over seven rivals. He stumbled at the start, then bounded into the lead with his competitors a length behind. On the far turn, Citation made his move. The Belmont crowd roared, as after being five lengths in front at the top of the stretch, Citation hit the wire in front of Better Self, tying Count Fleet’s stakes record of 2:28 1/5. Before 1948 was over, Citation would win 19 of 20 starts, 17 of them stakes. Although hindered by arthritis, he returned to the races in 1950, winning an allowance at Santa Anita before his legendary winning streak came to an end.

Calumet Farm is a thoroughbred breeding and training farm established in 1924 in Lexington, Kentucky by William Wright.

Ben A. Jones was hired by Warren Wright, Sr. to train for Calumet Farms. Under Jones, Calumet became one of the greatest stables in thoroughbred racing history. Jones is the only trainer to win the Kentucky Derby six times. He won the Triple Crown with Whirlaway and Citation.

Eddie Arcaro was an American Thoroughbred horse racing Hall of Fame jockey who won more American classic races than any other jocky in history and the only rider to have won the Triple Crown twice.