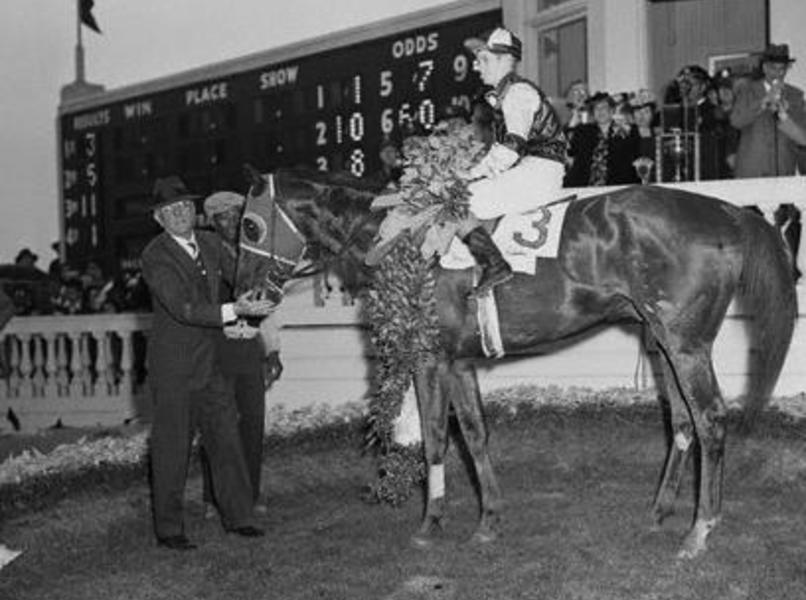 Previous
Count Fleet
Next
Citation
Assault
Assault was a delicate-looking liver chestnut who suffered from kidney and bleeding difficulties, plus a misshapen hoof that led to his nickname, “The Club-Footed Comet.”

Factor in an unprepossessing frame – he was barely 15.2 hands tall and weighed less than 1,000 pounds – and he would hardly seem a candidate for racing. At a full gallop, however, Assault was flawless, and his sweep of the Kentucky Derby, Preakness and Belmont Stakes in 1946 epitomized the will to win.

Assault broke his maiden in July at Aqueduct in his fourth start, finished a distant fifth in the East View Stakes six days later and then gained attention on August 6, 1945 – the day the United States dropped the atomic bomb on Hiroshima – when he won the Flash Stakes at Belmont Park at odds of 70-1. Troubled by splints, a bad ankle and a problematic knee, Assault’s delayed 3-year-old campaign kicked off with a victory in the Experimental Handicap at Jamaica, followed by a 4½-length win in the Wood Memorial. Four days after finishing fourth in the mud in the Kentucky Derby Trial, Assault destroyed 16 rivals in the Run for the Roses, pulling clear to an eight-length win at odds of more than 8-1.

In the Preakness, Assault held a four-length advantage at the top of the stretch but barely managed to hold on to a desperate neck victory over Lord Boswell. Lord Boswell was favored in the Belmont Stakes, but when the field of seven turned for home, he remained buried at the back of the pack. Assault’s three-length victory gave racing its seventh Triple Crown winner.

Robert Klebeg Jr.'s King Ranch is one of the larges ranches in Texas and is where Assault was foaled.

Max Hirsch spent his early years at the track as a groom and jockey. He is best known for his work with the King Ranch Stable whom he joined in the 1930's. Hirsch was inducted into the National Museum of Racing and Hall of Fame in 1959.

Warren Mehrtens grew up near Aqueduct Racetrack. Under the guidance of Max Hirsch, Mehrtens began to success in his career and went on to win the Triple Crown with Assault.