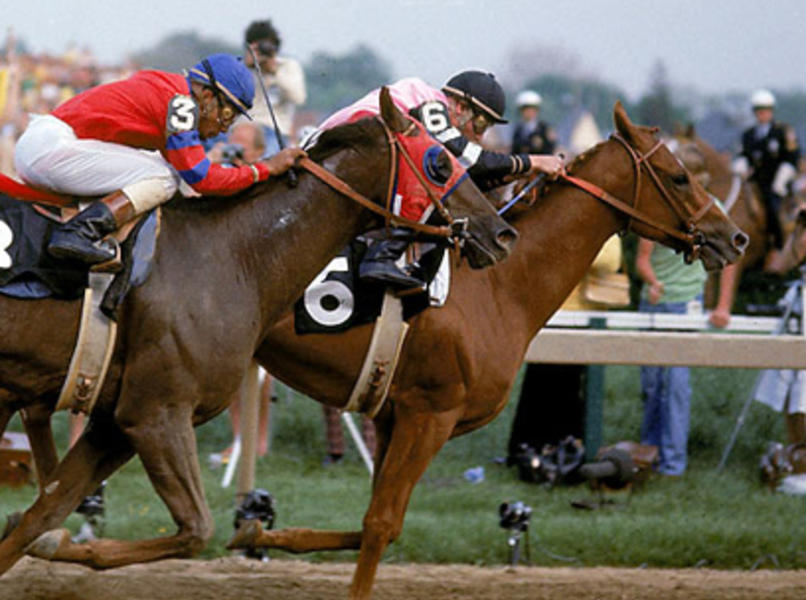 Affirmed has always been associated with Alydar since their epic rivalry captured America’s attention beginning as 2-year-olds in 1977.

The pair met several times during their 2-year-old seasons, and Affirmed bested Alydar in four of those contests, though Alydar was never far behind. After taking different paths to the Derby, the two horses met again on the first Saturday in May. Again, Affirmed defeated Alydar, by 1 ½ lengths. In the Preakness, Affirmed won again, this time only by a neck. By the time the pair met in the Belmont, everyone was talking about the two horses.

In the days leading up to the Belmont Stakes, Affirmed drew post position 3, Alydar post 2. A quarter-mile into the race, Affirmed was loping along in front with Alydar back in third. The early pace was slow and Alydar’s veteran rider, Jorge Velasquez, went after Affirmed, bringing Alydar right alongside of him at the mile marker. While the crowd had expected a duel, what they got was one of the greatest showdowns in racing history. The two horses matched strides from the mile pole to the top of the stretch – while Affirmed held on to a narrow advantage, Alydar kept coming, relentlessly pursuing his rival. But Affirmed crossed the wire first. In winning the Triple Crown, Affirmed set noteworthy milestones – it was the first time the Triple Crown had been won in consecutive years (Seattle Slew won it in 1977). The final time of 2:26 4/5 made it the third fastest Belmont in history.

Affirmed was named Horse of the Year in 1978. After a respectable stud career – though Alydar is considered to have sired more successful offspring – Affirmed died at age 26 in 2001.

Louis Elwood Wolfson was a Wall Street financier who used his wealth to breed and purchase thoroughbreds. He established Harbor View Farm in 1960.

Laz Barrera began working at a racetrack in his native country, Cuba. He eventually came to the United States where he built a solid reputation. In a career that lasted almost fifty years, Laz trained six champions and more than 140 American Stakes race winners. He was the leading money-winning trainer from 1977 to 1980 and the only trainer ever to win four consecutive Eclipse Awards. He was inducted into the National Museum of Racing and Hall of Fame in 1979.