Belmont Park still echoes with adulation for the past horses who've been embraced by racing fans. But it is also a refuge for people drawn to horses, as well as the place where the sport's past and present intersect to create a thrilling future.

Did You Know?
Who's Fastest?

Since 1867, the inaugural running of the Belmont Stakes, over 1,100 horses have started in the race. Winners have hailed from Kentucky, New York, Maryland, Texas and Montana as well as from England and Ireland, and range in color and sex.

Get the details on every Belmont Stakes Winner

The history of the Triple Crown, which is central to American racing, is written in a century of defining moments in the Belmont Stakes, including Secretariat's world record, Seattle Slew's undefeated sweep of the series, and Affirmed's survival of his rival's last onslaught. Only 13 horses have won this most rare of American sporting titles, while some 34 have been eligible to try. At Belmont Park, almost every champion of the last century has carved his or her name into the venerable stone of racing legend.

From the storied upsets of Smarty Jones, Big Brown and Real Quiet, to California Chrome's recent loss in 2014, some 23 horses have missed their shot at winning the Triple Crown. But even the close calls have made history. 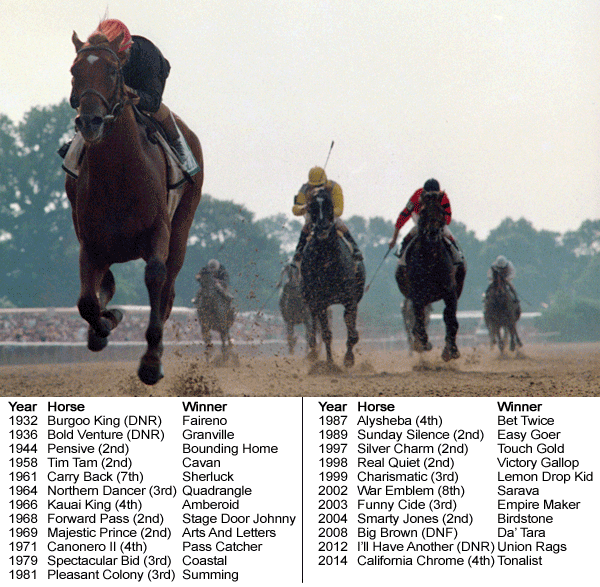 The closest finishes in history were by a nose, including Victory Gallop's defeat of Real Quiet....